This blog is no longer being maintained. Most of the content has been migrated to the new website at learning-notes.mistermicheels.com.

Almost every program will need some kind of error handling for when things go wrong, either because of incorrect code or because of things that the code has no control over (e.g., network errors). This post explains the tools Java provides you for handling errors.

When a method encounters a situation that prevents it from doing what it should do, it needs some way to make the caller of the method aware of this. One way of doing this is to return an error code if something went wrong. If the caller gets back an error code, it can then respond accordingly, possibly propagating the error to its own caller with an error code. A big drawback of this is that the caller must remember to check for error codes and then do something with them.

As an alternative to this, Java and a lot of other modern languages support the concept of exception handling. Here, a method can throw an exception indicating that something is wrong. These exceptions automatically bubble up the call chain until they are handled (or, if they are not handled, they end up terminating the current thread). Typically, they include a stack trace, indicating where the exception occurred in the code and what the call chain looked like at the time.

In Java, there are several kinds of exceptions. The following image describes what the general hierarchy of exception classes in Java looks like. 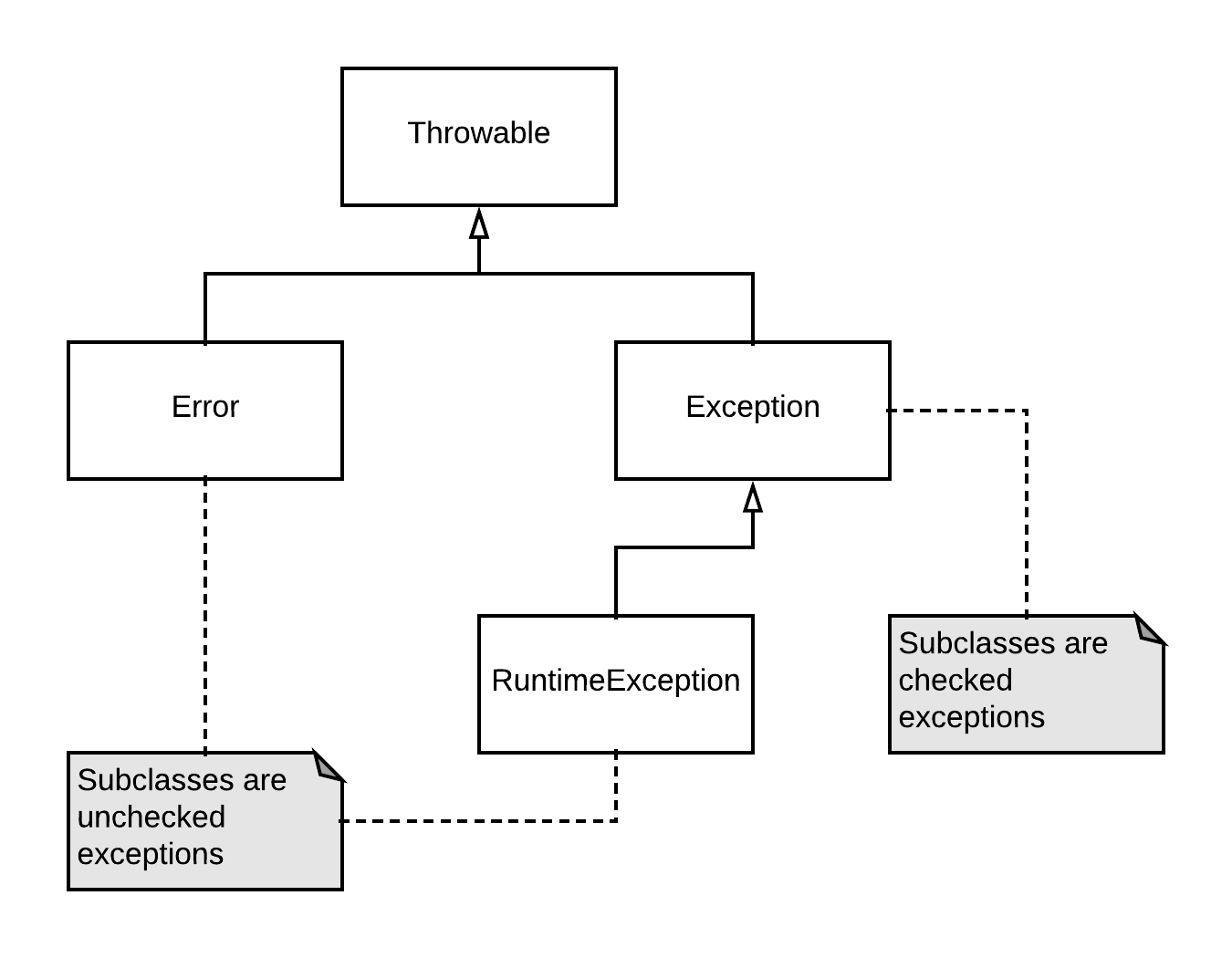 All exceptions are direct or indirect subclasses of the Throwable class. Subclasses of Error are exceptions defined by the Java language that are thrown when something really bad happens that the code can normally not recover from by itself. An example of this is OutOfMemoryError, which occurs when Java is unable to allocate space to an object because there is no more memory available and garbage collection does not help. If you run into that one, the best you can generally do is exit the program.

Throwing and the throws declaration

Throwing an exception is as easy as obtaining an instance of the exception and throwing it. An example is the following code.

In this case, we were throwing an IllegalArgumentException, which is unchecked. This means we do not need to declare (using a throws declaration) that the method can throw an exception of that type, although we can choose to declare it explicitly. The above code is an example of using unchecked exceptions to indicate programming errors: it never makes sense for the caller of this method to specify a lower bound that is higher than the upper bound.

We can fix the compiler error by either catching the IOException or declaring it using a throws clause.

This is a way for the compiler to remind us that there is a possibility for failures and that we will have to deal with those failures at some point in the code.

In order to handle an exception, you first need to catch it. Catching an exception allows your code to detect when the exception occurs and prevents the exception from bubbling up further through the call chain (although you can still trigger this yourself, see later).

Catching an exception happens in a try-catch block. In its simplest form, it looks like this:

One challenge regarding exception handling is the cleanup of resources. For example, if you have opened a file and an exception occurs while doing something with it, you should make sure that the file is still being closed at some point.

When the code exits the try block, either because we finished processing the lines or an exception was thrown inside, the PrintWriter will be closed automatically. It is also possible to provide multiple resources to a try-with-resources statement. In that case, the order in which they are closed is the reverse of the order in which they were provided.

A try-with-resources statement can also have catch clauses catching any exceptions occurring in the statement.

An alternative to the try-with-resources statement is the finally clause. This is especially useful if you need to clean up something that is not an AutoCloseable. After the try block and potential catch blocks, you add a finally block which will run after the rest of the try-catch statement has finished.

It is possible that your code wants to do something with an exception (for example, log it) but still wants the exception to bubble up further through the call chain. In this case, you can simple catch the exception, do what you want to do with it, and then just throw the exception object that you caught.

When the caller catches the ParentNotFoundException, it can find the original exception using the getCause() method.

In this case, ParentNotFoundException has a constructor which allows passing the cause (this is considered good practice). If an exception class does not allow that, the cause for the exception can be set through the initCause() method.

There also exist sneaky approaches that trick the Java compiler into ignoring checked exceptions. An example is the following implementation which I took from Core Java SE 9 for the Impatient (see resources below).

Now, any checked exceptions thrown inside the doWork method are ignored by the compiler.

Although this is a pretty cool trick, it is not generally applicable in practice. Not only would it be confusing to catch an IOException from a method that doesn’t declare it, but the compiler does not even allow you to do it.

There are some limited use cases where it could make sense to use this trick (although they are not necessarily considered good practice). The first one is if you are creating a Runnable that can throw a checked exception in its run() method (which does not declare any checked exceptions). You can define custom error handling behavior for the thread (for both checked and unchecked exceptions) in the thread’s uncaught exception handler.

Another case where it could make sense to use this method is when dealing with “impossible” exceptions. There are some methods in the standard library with a throws clause declaring checked exceptions, although there are some sets of arguments which are guaranteed to never throw an exception. If you know that you are passing such a set of arguments, you could use this trick to stop the compiler from bothering you about this impossible exception.